The new 2022 Weinsberg CaraBus 630 MEG Outlaw has to be the most ingenious vehicle that WEINSBERG ever built. Uniquely equipped for adventure seekers, its constructed with a gas-tight, separate garage for carrying up to two motorcycles, the family’s mountain bikes or even a quad bike.

Built on the Fiat Ducato it incorporates a fully-equipped living area, with rotating cabin seats, a well-equipped kitchen, spacious bathroom with a full shower and transverse double bed, making it a perfect vehicle for active holidaymakers who still require their home comforts. A dinette provides an additional two passenger seats, which can then make a third bed if required. The well-appointed, compact kitchen incorporates a large, 75 litre fridge and there’s also a two-burner cooker with electric ignition. The garage area is easily accessible from the interior through a safe, gas-tight door, preventing any fumes or bad odours from entering the living area.

There are many innovative details to admire in the ‘Outlaw’. Weinsberg have made clever use of every inch to provide customers with comfort and self-sufficient, adventure-seeking pleasure.

A style-conscious motorhome that skilfully combines utility with design. And for the new 2022 model year, it will be even better. A rearranged gas locker as standard, means both gas bottles can sit side by side lengthways and are easier to change too. An optional, integrated awning light is also available. Fiat seats with integrated seat belts, can now be ordered with the same fabric covering as the interior, as an option. 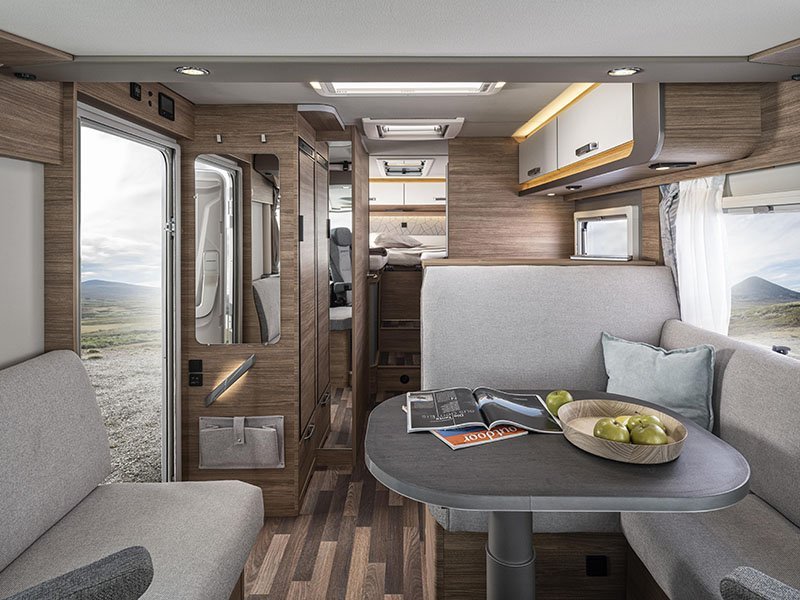 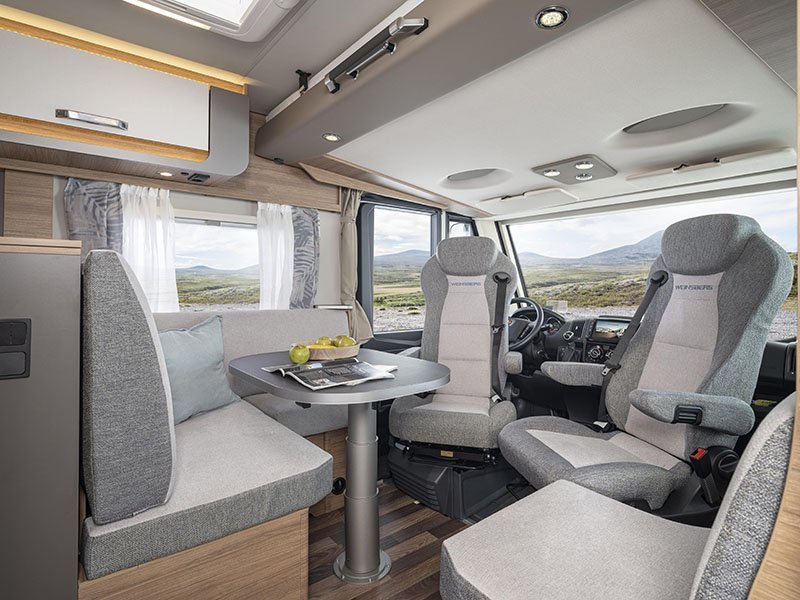 For 2022, the new CaraHome has an impressive new interior and a greater range of layouts. As well as the new 650 DG SUPERLIGHT (above), the 650 MEG is a brand-new addition to the range.

It has a popular single-bed layout featuring a dining table with rotating table top extension plus an extra side seat, enabling a fifth person to sit at the table. There’s also a three-burner hob in the kitchen, a spacious bathroom, an alcove bed plus two single beds arranged lengthwise at the rear, each with a wardrobe underneath. 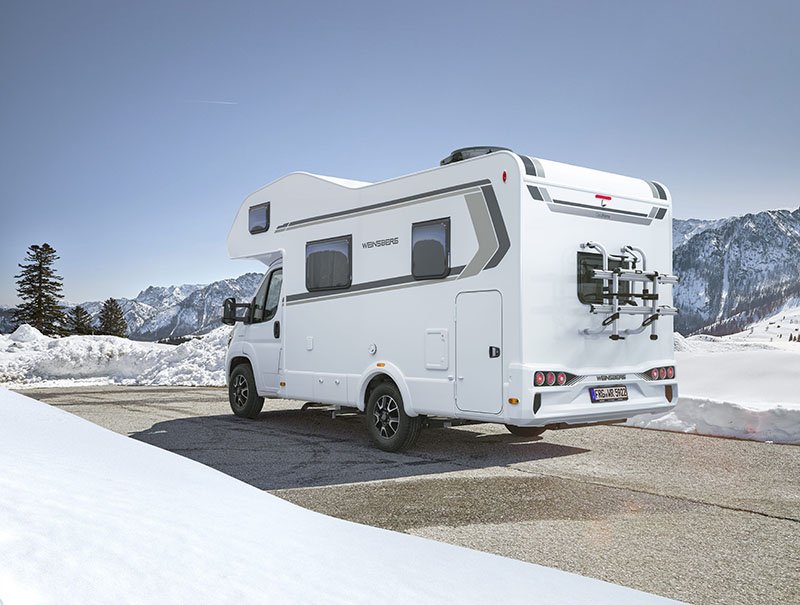 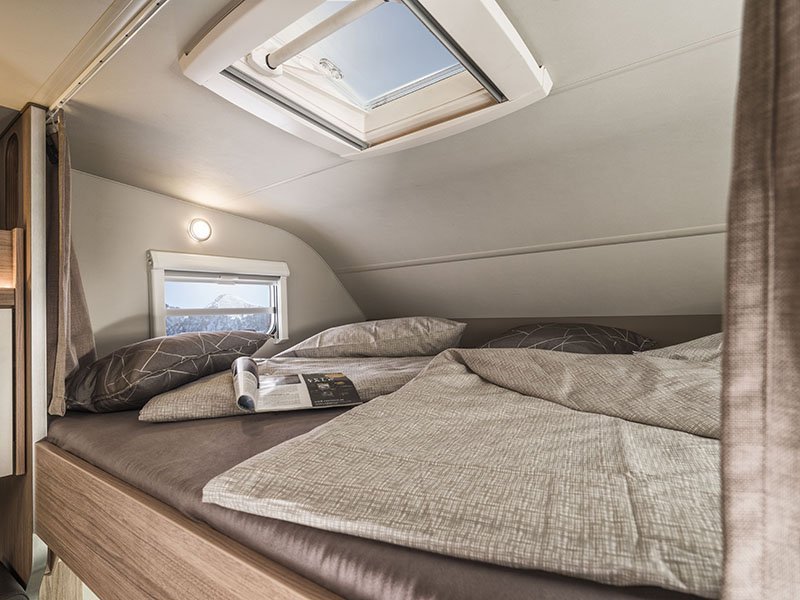 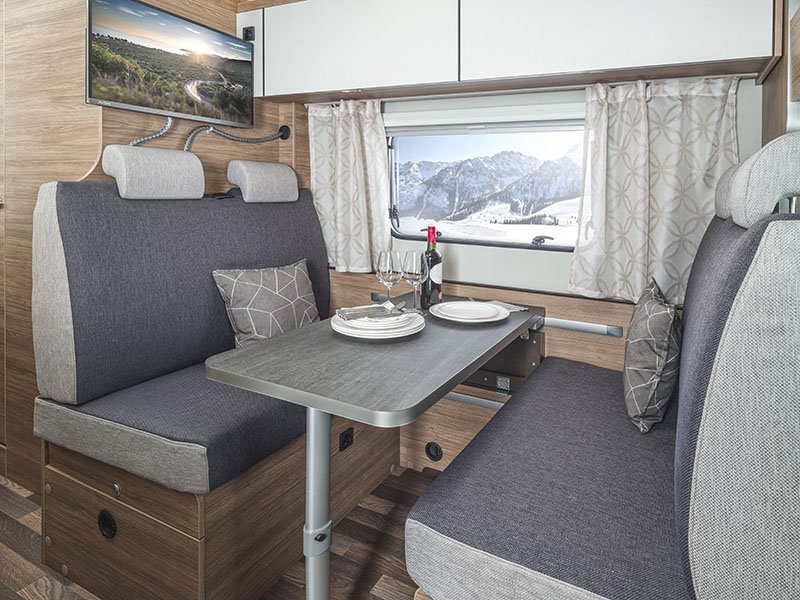 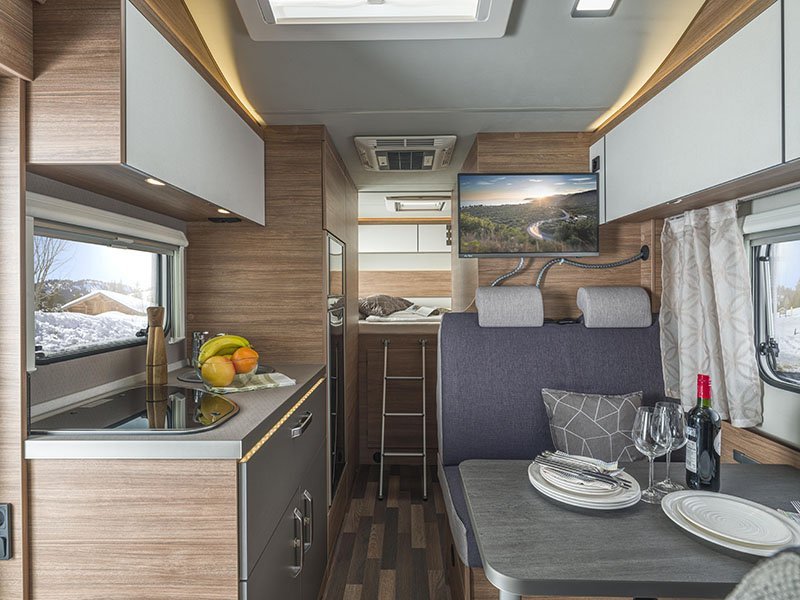 The exterior of the new 2022 Weinsberg CaraHome adds sophisticated technology, with perfectly insulating, 52 mm-thick XPS floor structure (previously 42 mm), plastic leaf springs and a high-quality, hail-resistant GRP roof covering, all make the CaraHome very sturdy yet lightweight and suitable for any weather. The gas locker is now arranged lengthwise, so both gas bottles can be accommodated side by side and also easily replaced (not on the 550 MG).

The new interior has a modern look, with lightweight furniture featuring a cross-laminated finish and handle-free front panels with straight lines. The spacious kitchen includes a large refrigerator (107, 142 or 177 litres depending on the layout). There’s a shower extension with curtain (deluxe shower room with side walls and partition doors available as an option), Thetford toilet, temperature and moisture-regulating EvoPore HRC light mattresses for excellent sleep, a partition door for the rear bedroom and an optional Smart TV. This stylish 2022 alcove motorhome comes in 550 MG, 600 DKG, 650 DG SUPERLIGHT and 650 MEG layouts.

A few innovative changes have been made to these two semi-integrated motorhomes, CaraLoft and CaraSuite, for 2022. In the CaraLoft 650 ME and 650 MF, plus the CaraSuite 650 MF and 700 ME, the gas locker is now redesigned so that two eleven-kilo gas bottles can now sit side by side, saving space and making it easy to change the bottles.

The spacious bathroom is now even more luxurious. In the CaraLoft 600 MF, a small step between the bed and the wardrobe has been added, so that from this point onwards, the bathroom floor is level. This provides a great deal more headroom for the shower. However, in the CaraLoft and CaraSuite 650 MF, there isn’t a step added, so the height of the double bed has been slightly reduced to make it easier to get into, which has also created a great deal more headroom in the shower.

This includes the new Truma iNet X system, which can be ordered as an option for all motorhomes. Through intuitive smartphone app control via Bluetooth, the iNet X panel operates both Truma and Alde devices, as well as the Dometic Freshjet air conditioning system. A colour 4.3" touch-control display clearly displays both outside and inside temperature, as well as battery, water and gas levels. Many vehicle features can also be managed using the control panel buttons, including the water pump, radio and TV, lighting and underfloor heating.

Thanks to Weinsberg’s revolutionary SUPERLIGHT technology, maximum weight saving is achieved, meaning no more stressing when loading. This innovative technology means you can now take even more equipment on your travels. Weinsberg has therefore made its biggest models SUPERLIGHT – the CaraCore 700 MEG and the new CaraHome 650 DG.

New, sturdier seat design, using lightweight technology and furniture with high-strength lisocore® lightweight panels combine with corrugated core structure to make weight-saving possible. XPS foam technology for improved stability and insulation along with plastic instead of steel achieve a further reduction in weight. Modifications to the chassis, with lighter leaf springs made of high-tech plastic and the optional, high-performance, lithium-ion battery means that a payload of up to 30% more is possible. At the same time, the new CaraCore 700 MEG SUPERLIGHT now has room for five people when driving.

Replacing the 700 DG, the new CaraHome 650 DG SUPERLIGHT includes a double bed at the rear and a spacious alcove bed. It’s more compact and agile, plus much lighter, despite being approved for 6 people, even when fully-loaded with numerous options, such as the Smart, Media and TV package, garage door, extra windows, a pull-out bed conversion, luxurious shower, air conditioning, an awning and a rear bike rack.